This guest post is written by historian Katherine Knight, whose blog Western Sydney Frontier provides updates on arts activism in the Western Sydney Region. Katherine kindly agreed to give us permission to publish an extract of her piece “Discussion, sharing and youthful energy increasingly animate Darug Aboriginal site“, which references some of the other exhibitions and artworks that have taken place in the area as well as our most recent Artist Camps.

For decades, Blacktown Council and the local Aboriginal community recognised the Blacktown Native Institution site’s significance, but there seemed to be no agreement about what should be done about it. As early as 1993, Penrith Regional Gallery developed an exhibition called Hypothetically Public, which included work done by eight local Koori (Aboriginal) artists evoking the old Native Institution on the corner of Richmond and Rooty Hill Rds. As they worked, they found their involvement becoming more spiritual and more personal, with a growing sense of what it means to be Aboriginal today. Left, is part of their installation of doors symbolising the enclosure of children at the institution and the exclusion of their families (photo by Ross Stephenson). The opening of Blacktown Arts Centre in 2002, under the auspice of Blacktown Council, was celebrated with an exhibition Originalities – Indigenous Connections to Place and Identity in Blacktown.

The site remained contested, but in 2004, Blacktown Council commissioned a conservation management plan, which recognised the site’s historical significance. By 2008, a landscape masterplan set out interpretive uses for the site and a year later, Blacktown Arts Centre mounted an exhibition, Black(s)town. Established and emerging Aboriginal artists explored the origins of Blacktown through its historical and contemporary identities. The original Blacks’ Town included the Native Institution site. In 2011, the site was listed on the state heritage register. Then in 2013, Blacktown Arts Centre presented The Native Institute, an exhibition at the centre led by Aboriginal artist-provocateur Brook Andrew, developed in conjunction with art works on the site. 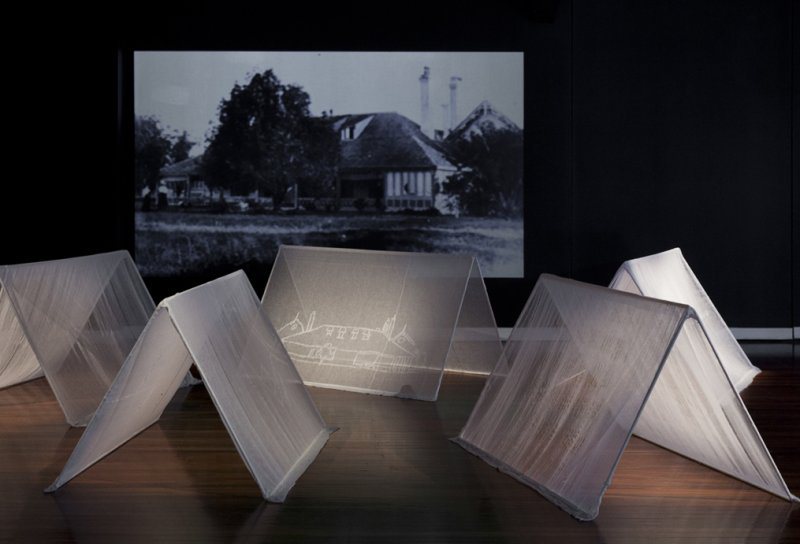 Aboriginal artists Daniel Boyd, Robyn Caughlan, Karla Dickens, r e a, Leanne Tobin and Jason Wing  participated and created works responding to the site and willingly discussed their work with visitors. Left, within arms reach, by Jason Wing, evoked  campsites of parents outside the institution fences, waiting for a glimpse of their children. In the same week, the Deerubbin Local  Aboriginal Land Council, the recognised claimant for land title in the region, repeated their claim that there is no clear evidence that descendents from the Darug tribe exist and has rejected Darug membership applications. This despite the fact that there are now many published genealogical records of Darug ancestry.

A revised plan of management was exhibited during this time and further consultations conducted by UrbanGrowth with local Aboriginal people. Aboriginal people were also among consultants conducting the research. Participants privately acknowledged that they were gradually finding common ground in developing a draft plan of management. The stated aim of the consultation was to “work towards ownership of the site by the Darug people in perpetuity”. This result would be the first time that any of their lands would be restored to the care of the traditional custodians. By the time of the recent celebration of culture on site, the revised plan of management was undergoing further discussion and adjustment in an atmosphere of harmony and goodwill.

The celebration was part of the Artists Camp #2, one of three artists camps conducted by Blacktown Arts Centre, the Museum of Contemporary Art and UrbanGrowth NSW – a C3West project, between November 2014 and June 2015. Left is John Cheeseman’s photo of Karla Dickens talking about the power of art in place. She described the importance of specific stories being told and illustrated with her recent experience of Bungaree’s Farm, a site-specific event created in the camouflage fuel tank T5, Georges Heights, Mosman. It was linked to the exhibition Bungaree: the First Australian then showing at Mosman Art Gallery, where John is director. Histories are not known by blackfellas as well as whites, she said, and it’s important that everyone learns. This is the great opportunity with the Native Institution site. Include the history of indigenous people in the history of Australia. Take back ownership, grieve and remember, she said.

Also participating in the day’s activities were Aboriginal artists Kristine Stewart and Uncle Steven Russell. Both are master weavers who willingly shared their traditional skills. Many people responded to their invitation to participate and enjoyed the meditative atmosphere while learning about the natural materials that could be harvested for use. Artist Darren Bell is also involved in the project.

Another function of the celebration was the recording of stories by Koori Radio and the scanning and collecting of photos, clippings and documents for the Blacktown Native Institution website. The celebration wound up with lively performances by contemporary music groups rapidly making a name for themselves. Left, Soul Benefits lets rip in a photo by Paul Howard. Badgemaking by the MCA’s Genext team ensured that Darug words could be learned and circulated widely – words like madang – brave, walama – return, ngurra – gathering, guwiang – fire, ngayiri – bring, and bembul – earth.